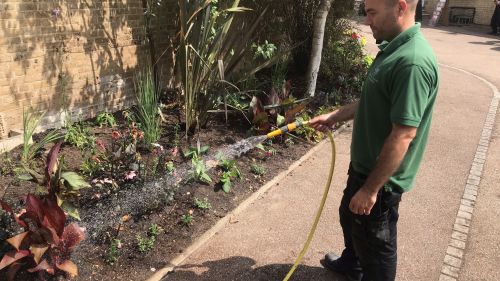 With temperatures hitting 40C in Cambridge last week, the gardening team at Downing have been at work planting a new tropical border running alongside the Maitland Robinson Library. The old border, which had many overgrown shrubs, has now been replaced with a new seasonal herbaceous border.

Head Gardener Jack Sharp said the idea was to create a more welcoming border at the entrance of college, which would allow signs to be seen and a better view around the corner.

Jack said “In the Spring and Summer months the border would have a tropical feel to it using Dahlias, Bananas, Cannas, Colocasias, Melianthus.

“During the winter the border would take on more of a traditional winter border planted up with winter interest plants for example, Hellebores, Snowdrops and Cyclamen.

“Some of the tender plants in the border will be lifted in the autumn and kept in the greenhouse over winter for the following year.”

Many plants are being grown from cuttings and plug plants, which has been made possible by the gardening team’s new greenhouse.