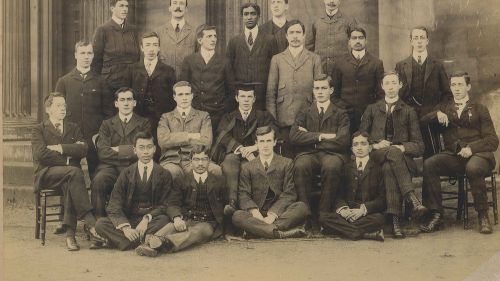 Today we remember Frederick Charles Davies who was killed in action during the Third Battle of Ypres (Passchendaele campaign) on 17 October 1917, aged 33, while attached to the 9th Northumberland Fusiliers.

Born in 1884, Davies was educated at St Paul’s School before matriculating at Downing in 1903 with an Entrance Scholarship (pictured above, seated far left, credit Lafayette Photography Ltd).  He was a member of the College’s rugby team, and proceeded to his degree in 1906 by way of the Natural Sciences Tripos.

When war broke out he was Tuberculosis Inspector for Cambridgeshire, medical officer to the county’s Insurance Committee and was also a consulting physician at Welbeck Street, London. Davies took a temporary commission as Lieutenant in the Royal Army Medical Corps on 10th August 1914 and within a week was at the front.  He was promoted to Captain after a year’s service.  Captain Davies is buried in Talana Farm Cemetery.