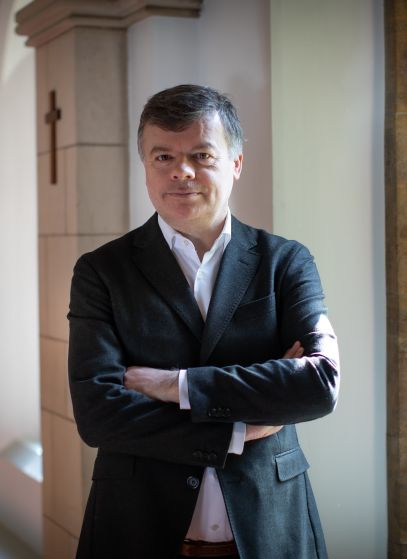 Master of Music at Westminster Cathedral for 20 years, from 2000, and President of the Royal College of Organists (2017-2019), Martin Baker was born and educated in Manchester, progressing from the Royal Northern College of Music Junior School, Chetham’s School of Music and St Ambrose College to an Organ Scholarship at Downing from 1985-1988. His playing has subsequently graced a number of the ‘major venues’ of the classical organ world, including St Paul’s Cathedral and Westminster Abbey where he held a variety of appointments throughout the 1990s.

Probably in light of the notorious difficulty involved in mastering even the basics of pipe/pedal organ, it is not generally regarded as an instrument given to improvisational exploration. However, Mr Baker has forged a reputation as one of the foremost improvisers of his day, winning first prize in that category at the St Albans International Organ Festival in 1997 and international renown not only as an innovative recitalist but also in his equally-acclaimed role as a choral director.  In 2015, the year of his election to the Honorary Fellowship, Mr Baker unveiled the new organ in Downing College Chapel with a highly-engaging programme of works by JS Bach and William Byrd, featuring, of course, some spectacular moments of improvisation. He is now enjoying life as a freelance organist and conductor.