Downing Dramatic Society represents a flourishing theatre community within the College, enjoying the use of Downing’s own beautiful Howard Theatre.

What makes the DDS so special - apart from all that patently-obvious talent, vision and dedication stuff - is that we have, unlike most other Cambridge Colleges, our own beautifully-appointed theatre space. The Howard Theatre, for those of an architectural persuasion, boasts a luxurious, Italianate proscenium stage and the most comfortable seating (for around 160) this side of a Ferrari interior - and we say that with confidence as the seats were made by the same firm.

"The society is always looking for people with new ideas, if you have one; we want to make it happen."

It’s what’s happening on the stage, though, that’s most important. In the past few years, DDS has presented a variety of ambitious theatrical events ranging from Greek and Elizabethan classics to powerful interpretations of challenging modern works and a regular helping of popular comedy.  Particular emphasis is placed on ensemble-based drama, especially for the annual Freshers’ Play in which the entire cast, crew and production team will be consist exclusively of students making their first foray into drama at Downing. We even aim to bring a bit of extra summer colour to the College gardens with a touch of ‘promenade’ Shakespeare to appeal to all ages.

The current jewel in the DDS crown, though, has to be the Festival of New Writing, inaugurated in 2014. Students from across the University are invited to submit a one-act play of no more than twenty minutes in length for presentation as one of up to ten performed over three nights in March. The works are analysed and discussed each night by a panel of top industry professionals from theatre and television. It’s a unique opportunity, not just for aspiring playwrights but for actors and directors to explore and develop new ideas for the stage. Each Festival has featured some truly outstanding new writing and we expect our fifth outing this year to reach even greater heights.

The society is growing apace and, as such, its members are constantly devising new ways to challenge themselves and their audiences. There’s a standing, open invitation to all Downing students to get involved; that play you’ve always wanted to put on, to write, or just to see performed..? Let us know. Persuade us it’s a must-see then set about transforming it from that ‘if only’ vision into glorious  theatrical 'reality' via the unlimited potential of the Howard stage.

Festival of New Writing, Lent 2019, "a chance to see the theatre of the future in action." 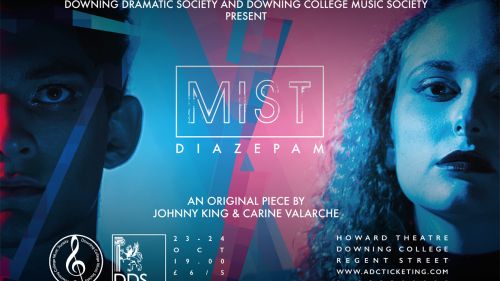