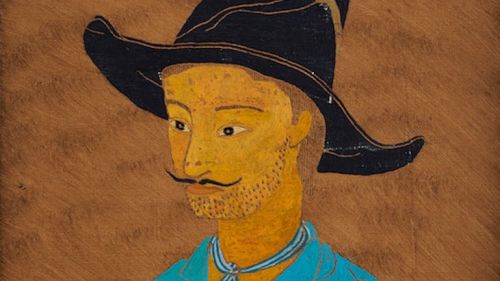 THE COURT OF REDONDA

The Court of Redonda is a major solo exhibition of new work by the British artist Stephen Chambers, presented by The Heong Gallery at Downing College in the University of Cambridge as a Collateral Event of the 57th International Art Exhibition – La Biennale di Venezia.

Curated by Emma Hill, The Court of Redonda centres on an enormous collective portrait of an imaginary court of writers, artists, film-makers and thinkers. The installation of over 100 individual paintings articulates the role played by artists in envisaging a world not how it is, but how it could be.

Redonda is a tiny, uninhabited island in the Eastern West Indies, around which an extraordinary literary legend has grown. It first took proper shape as a fantasy in the mind of Matthew Dowdy Shiell, a merchant trader who claimed the island in 1865 and elected himself monarch – effectively building castles in the air that others would add to and populate. His son M.P. Shiel, a writer of science fiction, determined that the kingship would be passed through a literary succession, and anointed the English poet John Gawsworth as his successor. Gawsworth went on to bestow honours to his friends, creating a court of writers, poets, artists and ne’er-do-wells.

Chambers has described his work as ‘the ignition point of unresolved narratives’ and has found in the concept of Redonda a labyrinthine weave of visual possibilities. He was introduced to the legend through the writings of the novelist Javier Marías – a former king of Redonda, who appointed many creative individuals to his honorary court, including Pedro Almodovar, A.S. Byatt and W.G. Sebald. Sparked by a ‘mental collaboration’ with Marías, Chambers has envisioned his own court of luminaries.

As Rod Mengham describes it: ‘The art of Stephen Chambers makes visible the patterns of meaning that activate the individual imagination from within and without; his patterns refer us to the stories uniting us as a group, even when they are stories of division and rivalry: stories about islands, and their relationship to bigger land masses....’

The Redondan ‘court’ is counterpointed with three large canvases entitled State of the Nation that were made before, during, and after Britain’s referendum about whether to remain in the European Union. The paintings hint at the precarious state of the modern world through their motifs of a falling rider.