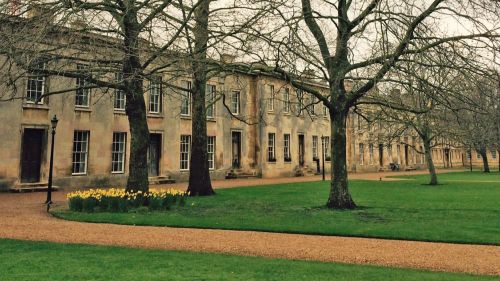 It is with regret that the College will seek to remove the three large Plane trees outside B staircase (the trees shown to the left in the attached image). This decision has only been taken due to the evidence of subsidence in A, B, and C staircases and after consideration of alternative measures.

Concerns about subsidence in the West Range were raised approximately two years ago. Cracks started to appear in plasterwork and gaps in stonework started to increase in size in the area around B staircase. A long process of monitoring and investigation has concluded that the problem can most likely be attributed to the trees immediately outside. It is not commonly known that the West Range was built without any real structural foundations in the sense that would be expected today. The trees, planted in the early 1970’s, have roots that penetrate beneath the front wall of the building as well as drawing increasing amounts of moisture from the surrounding soil. The resultant subsidence is slowly causing the front of the building to move.

Alternative remedies including underpinning and root barriers were considered but ultimately rejected. Underpinning would simply cause further distortion around any ‘hard points’ that were created and a root barrier was unlikely to be successful given the size and proximity of the trees and the soil drainage issue.

Now that the decision has been made to remove the trees, it is hoped that the process will proceed quickly to minimise any further damage to the buildings, subject to the impending revision and examinations period.

Many members of the Downing College community will be sorry to see the trees go. As well as welcome summer shade they have provided classic views that many will associate with the College. Hopefully, as the planting around the Library, East Lodge Garden and other areas of the Domus takes shape, more shade, and many more memorable views, will be created.