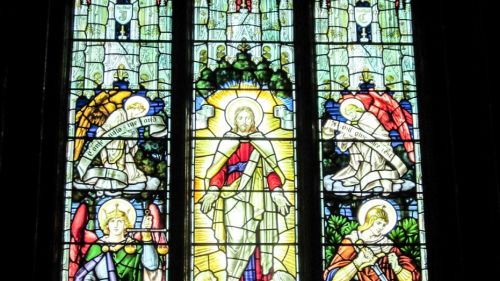 Today we remember Frederick Rotherham Cecil (1892 - 1916) who died in tragic circumstances on this day 100 years ago.

Born in London in 1912, Frederick Rotherham Cecil came to Downing College in 1912. He was resident in College until the outbreak of war in 1914.

Cecil joined the 28th Battalion (London Regiment) Artists Rifles’ Officers' Training Corps and should have gone out to France in November 1916, but records show he was ‘incapacitated by an attack of influenza’ and on 29th October he was given sick leave. On 7th November 1916 Cecil was absent from Roll Call at Hare Hall Camp and was never seen alive again. He was found drowned in the Serpentine Lake, Hyde Park, on 21st December 1916, age 24.

Along with his brother who was also killed during the war, Cecil is remembered in a stained glass memorial window dedicated by their mother, Mrs Henrietta Hervis Cecil, in 1927 at Dronfield (St. John the Baptist) Church and Churchyard. Image of Cecil Window Memorial Courtesy of Jenny D & the War Memorial Trust (2013).