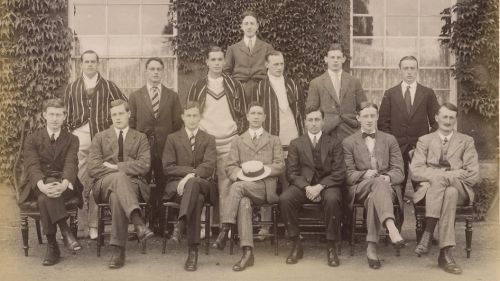 Today we remember Captain Walter Douglas Aston, the only Downing Fellow to be killed in action during the First World War.

Born in Cheshire in 1882, Aston was educated at New College, Worthing.  In 1901 he gained a Minor Scholarship and matriculated at Downing College, gaining First Classes in Parts I and II of the Law Tripos. After graduating he was awarded a Whewell Scolarship for International Law in 1906 and was elected to a Fellowship at Downing the following year.  During his time as a Fellow at Downing, Aston held the offices of Steward, Librarian, Treasurer of the Amalgamated Club and Lecturer in Law.

On the outbreak of war, having previously had no military experience, Aston joined the C.U.O.T.C., and gave most of his time to its work. In April 1915 he obtained his first commission with the Cambridgeshire Regiment, being promoted to Captain during his training before going out to France in September 1917.  Captain Aston died on 2 November 1917, and is commemorated on the war memorial at Downing College.

A friend wrote that Aston's ‘habit of doing the next thing in front of him, whether it was work, or a game, or a social duty (and he was good at all three) with the topmost vigour at his command, must make his an incalculable loss to a small College.’