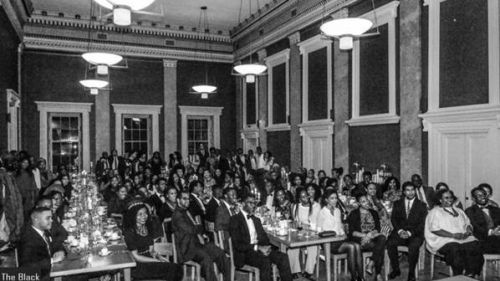 Downing College was delighted to welcome the Black Cantabs Monthly Speaker Series at The Heong Gallery on 27  April 2017.

The Black Cantabs Project was launched in October 2015, with the aim to uncover, or recover, the university’s ‘lost students’ through archival research.  It is an organised opportunity for ‘current and former students of the University of Cambridge to write the black students of this institution back into its history’ and publish these findings online.  Downing Fellow Dr Mónica Moreno Figueroa is Patron of the Black Cantabs Research Society.

Jointly hosted by the Black Cantabs, African Society of Cambridge University and the Centre of African Studies, the recent event at The Heong Gallery was the second in the Black Cantabs Speaker Series.  The speaker, Ms Brigitte Sesu Tilley Gyado, a British Nigerian writer, social entrepreneur and alumna of Robinson College (2004), shared her experiences of working in tech, micro-financing, and gender rights in Africa.

The event also provided an opportunity to celebrate the contemporary African Art collection currently on display at The Heong Gallery.  The exhibition ‘ When The Heavens Meet The Earth’ highlights emerging African artists from over a dozen countries on the continent from the Sina Jina collection of Robert Devereux, an alumnus of Downing. The works are presented though multiple media including photography, painting, sculpture and film. With pieces that explore everyday life, politics, human rights, LGBT +, representation and identity, this exhibition has been described as impactful, provocative and playful.

Those attending the Black Cantabs event were informed of an exciting and little-known Downing connection with one of the artists featuring in the exhibition.  Photographer Rotimi Fani-Kayode (1955-1989), whose work appears on the exhibition poster, was the son of Remi Fani-Kayode (1921-1995), one of Downing’s own Black Cantabs. The College Archivist is continuing research in support of the project.

We will share more information on Downing’s Black Cantabs in our From the Archives pages as our research progresses.