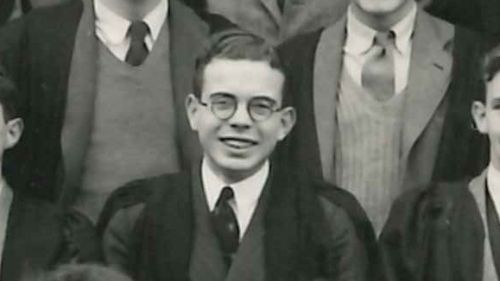 Alan Howard matriculated at Downing on 4 November 1948 studying Natural Sciences.  He was awarded an Exhibition the following year and, after graduating in 1951, began a PhD at the College under the supervision of Downing Fellow Dr Frank Wild. He was elected to the Arthur Paul Saint Scholarship in July 1952, which he held for the remainder of his time at the College, collecting his MA and PhD in January 1955.

Dr Howard was a College Lecturer in Nutritional Research at Downing for five years from April 1983 to March 1988, during which time, through the Howard Foundation, he generously supported the College in funding its first purpose-built function rooms, The Howard Building, a new building designed by the architect Quinlan Terry.

Dr Howard was elected to an Honorary Fellowship on 13 March 1987 and was one of the first five Wilkins Fellows inducted on 14 October 1999.  Dr Howard is pictured (below) with his son, Downing alumnus and Wilkins Fellow, Jon Howard, outside the Howard Building. The Howard Foundation has continued to be a most generous benefactor of Downing College, enabling the enhancement of its public rooms, residential accommodation, the Domus, and providing the Howard Theatre.

All other photographs ©Tim Rawle.