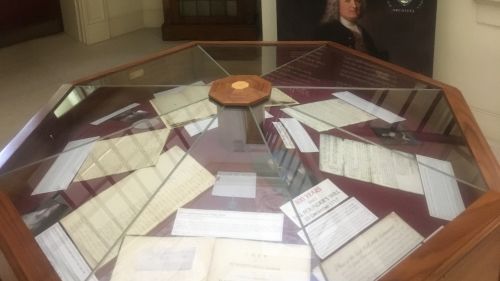 A new archive exhibition has opened in the Library Octagon to mark the 300th anniversary of the signing of the Founder’s will on 20 December 1717. The display includes original items from the archive, including the 1749 probate copy of the will.

Jenny Ulph, College Archivist, says, "The original signed will of Sir George Downing, 3rd Bt, is held at the National Archives as it was lodged as part of the litigation to found the College.  The last resort in the will eventually resulted in the first Cambridge college in over 200 years – due in part to the fortuitous ‘disgusts and aversions’ which arose between Sir George and his estranged wife, detailed in her unsuccessful divorce petition – for which we must always be thankful!"

This new Downing Archive exhibition coincides with the Explore Your Archive campaign which takes place between 18 and 26 November 2017, and is coordinated by The National Archives and the Archives and Records Association (UK and Ireland).  The campaign is now in its fourth year.