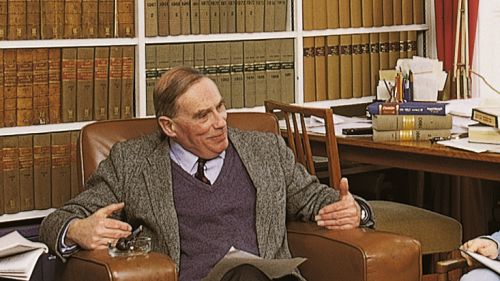 Downing College is most sad to announce the death of Mr John Hopkins.

With John's death, we have lost one of our most beloved Fellows, a colleague and teacher who is recalled with the greatest affection and loyalty by his former students and tutees.

John was elected a Fellow in 1961, and an Emeritus Fellow on his retirement in 2004. During more than 40 years of committed service to the College and its students, he acted as Director of Studies in Law, while in addition undertaking the roles of Tutor and Senior Tutor. As an ardent supporter of Downing, he helped frame the academic vision of the College.

Through the great generosity of his former students, the Hopkins Parry Fellowship in Law was established by endowment in 2004, and his room on P staircase was named in his honour in 2016.

Downing's 1800 Charter speaks of a College with special interests in Law and Medicine. No-one in recent times has done more than John to establish our current reputation as an institution where Law thrives, and we are deeply proud of this legacy.

John is survived by his wife, his two children, and his five grandchildren, to whom Downing College expresses the heartfelt sympathy of its members.

Details of memorials will be announced in due course.

Obituary in The Telegraph.