The 250th anniversary of the death of Sir Jacob Downing, 4th Baronet

2014 marked the 250th anniversary of a significant event in the history of Downing College. On 6th February 1764, Sir Jacob Downing, 4th Baronet, died childless. He was the last of the named heirs in the 1717 will of his predecessor Sir George Downing, 3rd Baronet and his death should have resulted in the foundation of Downing College. Sadly, he had other ideas... 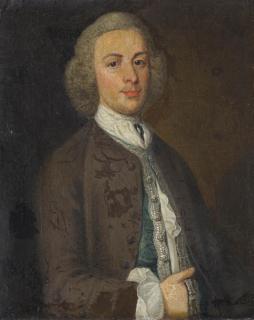 In his will, Sir George had expressed his wish that, if all his named heirs died without issue, the considerable Downing estates should be used to found a college in his name in Cambridge. With four living heirs at the time, and every chance of any one or all of them having their own children, the possibility of a new Cambridge college was remote.

When Jacob Garrard Downing became the fourth baronet on the death of his cousin in 1749, the estates he inherited were in a poor state of repair. In the years before Sir George Downing died, he had neglected his estates and reportedly lost £1500 a year by failing to find tenants for vacant farms. In 1744 he was the victim of a vicious attack at Tower Farm in Tadlow, by a 'villainous fellow [who] alleged he thought he did no harm by killing a person who paid nobody, and was so ill a landlord and paymaster with so great an estate'. [HW Pettit Stevens 'College Histories - Downing' 1899, p.30]

His successor, Sir Jacob Downing, took great pride in his land and slowly rehabilitated the estate. Old buildings were repaired, new ones built and open land enclosed, at a cost of around £30,000. One of his first acts was to commission a series of maps by Joseph Cole, showing the different farms which made up the estate. (These estate maps still survive in the College archive today). However, as he grew older, Sir Jacob's thoughts obviously turned increasingly to his lack of heir and what would happen after his death as some new barns and buildings were put onto pattens, or rollers, perhaps so that they could be moved off the entailed land by his wife after his death.

Sir Jacob left all the Downing estates to his widow, Lady Margaret Downing, contrary to the specific directions of his predecessor's 1717 will, and it was with this lady and her heirs, that the University of Cambridge and the heirs at law of Sir George Downing waged a legal battle which lasted over 40 years. This prolonged litigation considerably diminished the value of the estates, which deteriorated seriously. Lady Margaret presided over the demolition of Gamlingay Park, the grand family seat built by Sir George, pulling down the house in October 1776 and selling it brick by brick at auction for a fraction of its value.

She died two years later but, in leaving her estates to her second husband and nephew (estates which were not legally hers in the first place), she perpetuated the matter still further. It was not until March 1800 that the matter was finally settled, but in reaching a financial settlement with Lady Margaret's heirs to bring the issue to a close and the creation of Downing College a step nearer, the massive reduction in the value of the estate and immediately available funds had sweeping consequences. It had been assumed, once the lawsuit was finally won, that it would be possible to raise sufficient capital for establishing the new college on the security of the estate revenues, but arrears of rent amounted to about £100,000 of which only £10,000 was recovered, and rents brought in only about £6000 per year from 1802. Moreover, the College was responsible for paying over £850 in tithes each year. As a consequence, the charter for Downing College may have finally been granted in September 1800, but the first building was not ready until 1806 and it was not until 1820 that the first undergraduates appeared.

Fifty six years after the death of Sir Jacob Downing, and despite his actions to prevent its creation, the college which bore his family name was finally open for business. However, the actions of his wife in the years following his death were to have a significant and lasting impact on its finances.